A HCM embraces a more general construct (i.e., the HOC), measured at a higher level of abstraction, while simultaneously including several subcomponents (i.e., the LOCs), which cover more concrete traits of this construct. HCMs enable reducing the number of structural model relationships, making the PLS path model more parsimonious, while increasing the bandwidth of content covered by the respective constructs.

The establishment of HCMs builds on carefully established theoretical/conceptual considerations. On these grounds, researchers choose from four major HCM types. Each of these HCM types depicts the specific relationship between the HOC and the LOCs as well as the measurement model used to operationalize the constructs on the lower-order level: reflective-reflective, reflective-formative, formative-reflective, and formative-formative. Generally, the HOC of reflective-reflective and formative-reflective HCMs represents a more general construct that—similar to reflective measurement models—simultaneously explains all the underlying LOCs. Conversely, the HOC is formed by the LOCs in reflective-formative and formative-formative HCMs, which is similar to formative measurement models. The repeated indicators approach, the total effects analysis of a collect-type HCM (i.e., the extended repeated indicators approach; Becker et al., 2012), and embedded and disjoint the two-stage approaches (Sartstedt et al., 2019) allow modeling and estimating HCMs in PLS-SEM. When specifying and estimating HCMs in PLS-SEM, researchers need to consider further aspects, which relate to the number of indicators per LOC, the PLS-SEM algorithm weighting scheme, and the use of Mode A and B weighting.

Researchers can use the SmartPLS software to model any of the four HCM types introduced in this chapter. When analyzing the results of a HCM estimation, researchers not only need to carefully evaluate the measurement models of the LOCs but also the measurement model of the HOC. Different from other constructs in the PLS path model, the assessment of the HOC is not concerned with the relationships between the HOC and its indicator variables but the relationships between the HOC and its LOCs. While these relationships are mapped as path coefficients in a PLS-SEM analysis, from a modeling perspective, they correspond to loadings (in case of reflective-reflective and formative-reflective HCMs) or weights (in case of reflective-formative or formative-formative HCMs) and need to be interpreted as such.

The following figure shows an example of a reflective-reflective second-order model of corporate reputation (i.e., REPU) with competence (i.e., COMP) and likeability (i.e., LIKE) as first-order constructs in SmartPLS. 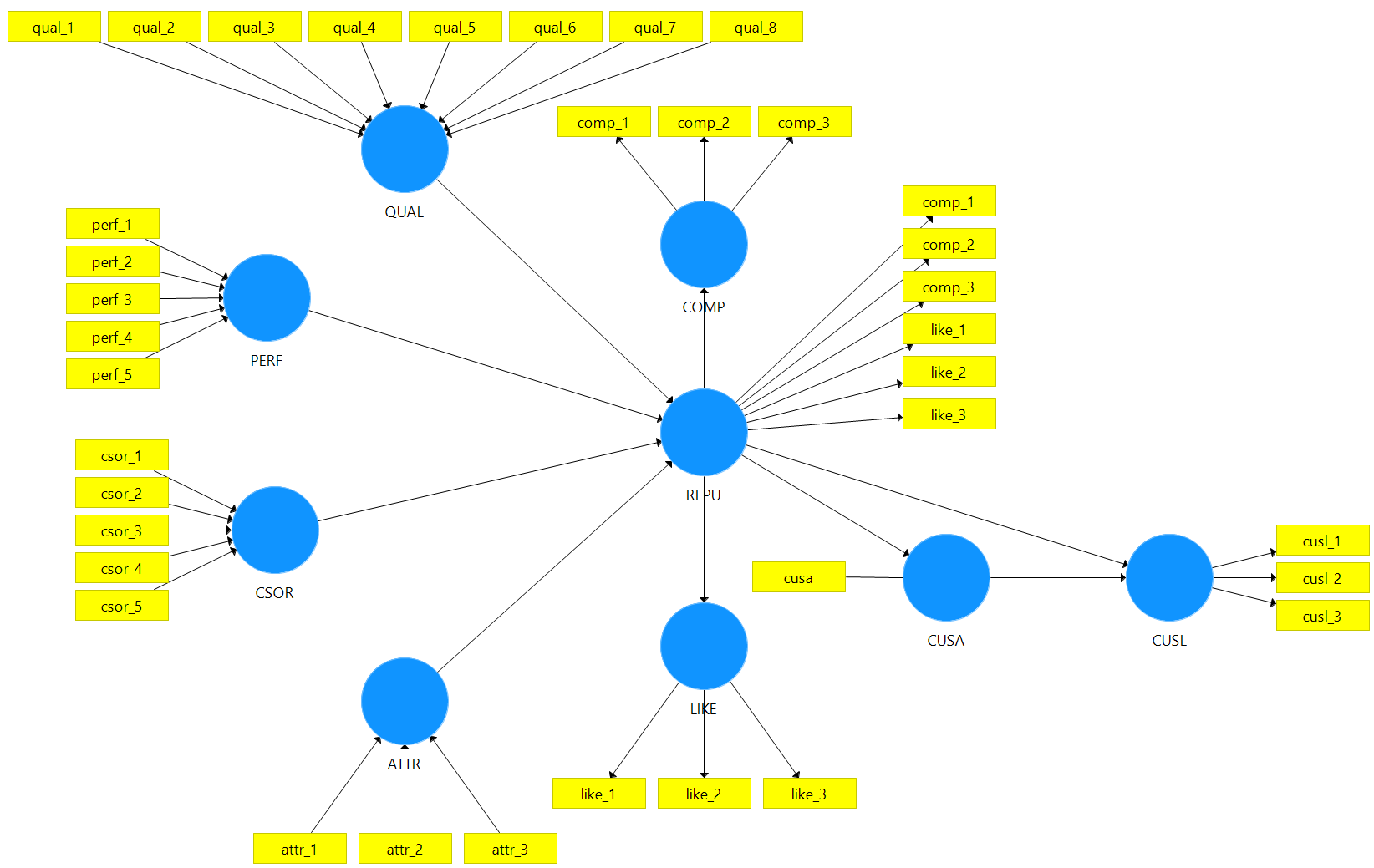 Please always cite the use of SmartPLS!